‘Lemon Drop’ is a ten minute short film that offers lots of entertainment and very little advertising. The piece was created by TBWA/Chiat/Day New York, but it resembles the stylings of popular Quentin Tarantino films (e.g. – ‘Pulp Fiction’ and ‘Kill Bill’) because of it’s retro styling and 70s hallmarks—a sexy heroine, sleazy villain, and unique camera angles. The production quality is amazing. It has what it takes to capture the attention of a wide ranging adult audience thanks in part to high-profile actors, Ali Larter (‘Final Destination’ and ‘Legally Blond’) and Martin Kove (‘Rambo’ and ‘Karate Kid’).

The full-length film was released on September 10, 2010 on the Absolut Facebook page. Several tactics were employed to drive traffic there, including the release of a 30-second movie trailer, print ads that appear to be movie posters, billboards, and bus stop graphics. The trailer was seeded on YouTube shortly before the September 10 release of the film; print and outdoor elements hit about that same time. 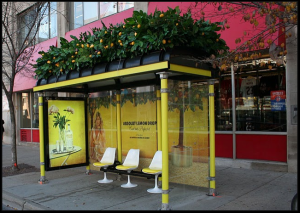 Absolut made this an effective campaign by creating an interesting film that most viewers would find entertaining and pass along to friends. Early interest was secured with a trailer and multi-channel advertising. Launching the film on Facebook added to its effectiveness. To view the full-length film, viewers must “Like” the ad page. Upon liking that page, viewers are rewarded with access to the film and other freebies—desktop wallpaper, movie posters, and the Absolut Lemon Drop drink recipe. Overall, this is a good execution of buzz-building through short films and a combination of traditional and emerging media.