What makes some creative advertising great? Simplicity, clarity, aesthetics? In their text, Creative Strategy in Advertising, Bonnie Drewniany and A. Jerome Jewler say that, “Creative ads make a relevant connection between the brand and its target audience and present a selling idea in an unexpected way.” There are three important components, but it’s the unexpected element that sets truly great ads apart from the others.

“Creative ads make a relevant connection between the brand and its target audience and present a selling idea in an unexpected way.”
—Drewniany & Jewler

Effectively connecting any brand to its target audience requires a deep understanding of brand characteristics that overlap with the audience’s needs, wants, desires or beliefs. It helps to articulate the brand in a clear way for marketers and creatives. When making a connection, remember the audience is made up of people who want to feel connected to the brand on a personal level.

Consider an emotional approach when crafting selling ideas. Rational benefits appeal to many consumers, but don’t separate the brand from competitors. Emotional appeals help people visualize how the brand will make their lives better. The more your product or service resembles a competitor’s, the more you should rely upon emotional selling points.

Reward viewers for taking time to read your ad. Do something unexpected, entertain them, or show them something the target audience will understand better than non-target audience members. This requires more than logical, left-brain activity. It requires divergent, right-brain activity—unleashing the creative power to find ideas that research and forecasts won’t reveal. An unexpected element may be in the message, the messenger, the imagery, or the form of delivery. After brainstorming and ideation, run ideas through a filter for authenticity and relevance. If it doesn’t reflect the brand AND mean something to the target audience, don’t use it. If it speaks to them in a clever and meaningful way, they will feel understood and move closer to becoming loyal fans.

Below are two examples of creative ads that leverage the unexpected to connect with their target audience in a memorable way.

Volkswagen used a clever headline, a simple photograph, and some unexpected copy to get America’s attention in the 1960 “Lemon” ad. Other car manufacturers were advertising vehicles with idealistic, full-color illustrations and dramatic copy that described rational benefits. “Lemon” seems like a derogatory headline, luring readers into the rest of the copy and revealing the sarcasm—this vehicle failed inspection because of a “blemished glove compartment.” The ad goes on to discuss Volkswagen’s preoccupation with inspection and quality. It took readers by surprise and gave Volkswagen a sense of humor and transparency. As a result many Americans became VW enthusiasts. 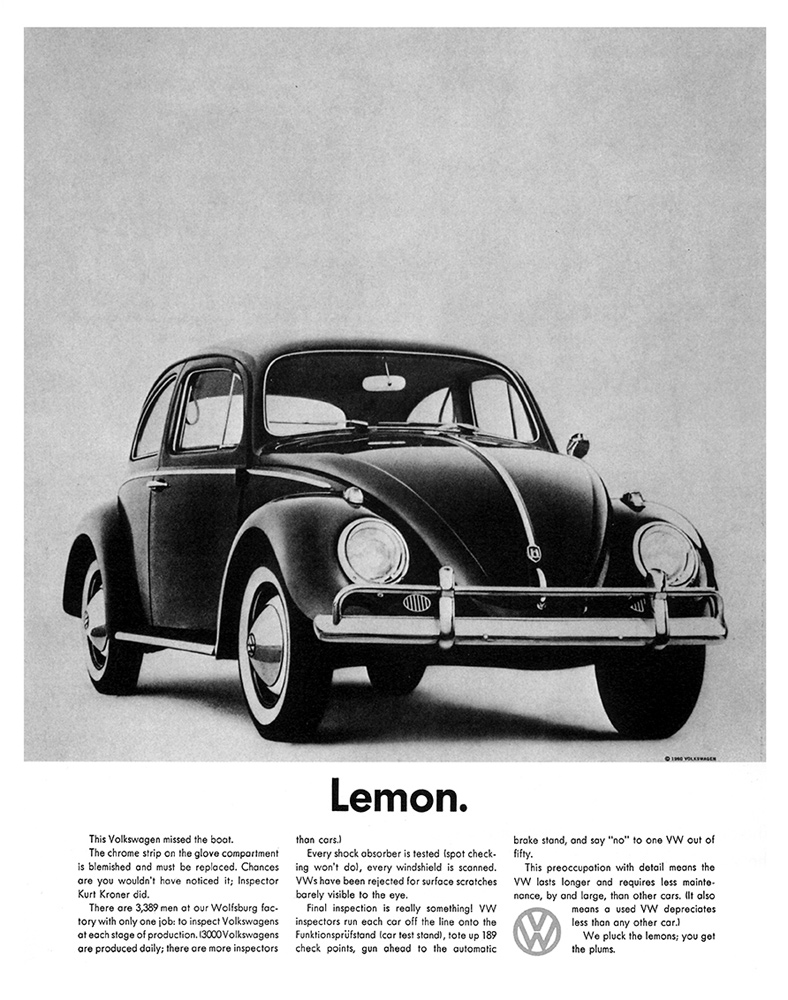 In a more recent example, Gnarly Head Cellars breaks through the mold of sophisticated wine ads with consumers displaying a “Hint of Gnarly.” Their confident expressions and fashionable attire do not hide evidence of their gnarly personalities—a broken finger, a bandage on a nose, burn marks on a face. Their boldness appeals to foodies, people who enjoy the adventure of searching for great food and wine as much as finding it. They aren’t trying to win the hearts of wine snobs or gourmands. Foodies get it. They take pride in the scars that tell their stories as much as they do the discovery of a flavorful wine at a modest price.